Jedi Order
Rey's lightsaber was a yellow-bladed lightsaber that was constructed as a personal weapon by the Jedi Rey Skywalker during the First Order–Resistance war.

Rey's lightsaber was built of salvaged materials from the maker's quarterstaff and a cloth handgrip. The weapon had a kyber crystal at its heart, and emitted a yellow-colored plasma blade when ignited. The emitter matrix on Rey's weapon featured a rotating gear-like mechanism, which caused the emitter of the lightsaber to open up and allow the plasma blade through.

During the First Order–Resistance war, Rey began to construct her own lightsaber with parts from her quarterstaff in her quarters at the base on Ajan Kloss. She was considering a hinged design with an emitter at either end, but decided against it after facing a dark vision of herself in the wreckage of the second Death Star. In the lead-up to the Battle of Exegol, the hand-made droid D-O rustled through Rey's workbench, almost disturbing the lightsaber, before being chastised by Rey's friend and fellow Resistance member, Finn.

After the Battle of Exegol, Rey traveled to the planet Tatooine. There, Rey unveiled her finished, single-bladed weapon after burying the two lightsabers of her mentors, Luke Skywalker and Leia Organa, at the ruins of the Lars homestead—the former place of residence of the Skywalker family. Shortly thereafter, she was approached by an old woman who queried her identity. With the blessing of Luke and Leia's spirits, the Jedi declared herself "Rey Skywalker." The lightsaber which she had created would honor the Skywalker legacy. 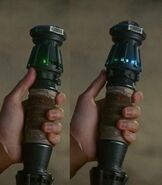