Rey Skywalker (born Rey Palpatine), once known only as Rey was a Force-Sensitive Human who grew up alone on the planet Jakku, hoping that one day her parents would return for her while honing her skills as a scavenger and a warrior. Her life would change forever when she met BB-8, a droid of the Resistance who carried within him a map leading to the legendary Jedi Luke Skywalker, and a renegade Stormtrooper who named himself Finn. They were hunted by the First Order, forcing them to flee aboard the Millennium Falcon, eventually finding help from Han Solo and Chewbacca while traveling to the Resistance base. While on Takodana, Rey found an old Lightsaber that belonged to the Skywalker family but turned it away along with the blade being a sign of her destiny. Rey was soon captured by the dark warrior Kylo Ren and while in captivity she discovered her own Force-Sensitivity. With her latent connection to the Force, Rey escaped Starkiller Base and defeated Kylo Ren in combat.

With the map to the lost world of Ahch-To now completed, Rey ventured to the first Jedi Temple and found Skywalker himself in exile.

Rey then grew up on Jakku, eking out a life as a scavenger and hoping that one day whoever had left her on the barren desert world would return. She learned how to survive, becoming a gifted mechanic, pilot and warrior. But she seemed destined to live out her days on a forlorn backwater world, ignorant of the larger galaxy and its perils and possibilities.

Rey’s life changed when she encountered BB-8, a Resistance astromech carrying a star chart offering a clue to the location of the long-lost Jedi master Luke Skywalker. Rey and the renegade stormtrooper Finn forged an unlikely friendship, escaping Jakku and finding themselves caught in a galactic war – with both of their destinies shaped by the awakened power of the Force.

The harsh realities of such a world like Jakku could have easily made a person cynical or guarded against sympathy and weaknesses, but not Rey. Despite seeking out a meager existence in the scorching heat of the Western Reaches planet, Rey possessed a heart full of generosity and a willingness to help other people in need.

It was this willingness that led her to not only help BB-8 be free of Teedo's interference and Plutt's attempts to acquire the droid, but also led her to help BB-8 in its mission to return the star map it carried to the Resistance. Though she never wanted to leave Jakku for fear that she would not be there when her family returned for her, she believed in the importance of the Resistance and its fight against the First Order enough that it gave her strength to continue on BB-8's mission to find Luke Skywalker and defeat the First Order.

Her encounter with Maz Kanata profoundly impacted how she saw herself and what she was capable of, and Rey began to see that she was part of a larger galactic fight—and that the power of the Force was with her. Her recognition of these abilities and her destiny coincided with turbulence in the Cosmic Force, which for years had remained dormant and ultimately led her to find Luke Skywalker.

Rey's kindness and compassion reaches even Kylo Ren, that was her enemy at first. Through their Force Bond connections she starts to understand the reasons behind his persona and realises how his loneliness and pain mirrors a lot of her own. When she learns the full extent of his past she becomes determined to bring him back to the light side. Even when her attempts failed, Ren is legitimately touched by her genuine warmness towards him and, as a result, they fall for each other. Later, her love is one of the key things that encourages him to leave his Kylo Ren persona. 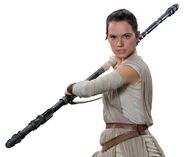 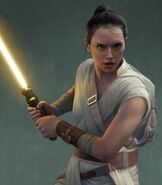