Clone Captain Rex, officially designated CT-7567, served the Galactic Republic during the Clone Wars, often taking orders from General Anakin Skywalker and Commander Ahsoka Tano. Rex was a very strong-willed Clone Trooper, and was shown to be very freethinking when compared to other clones. Rex can go so far as to even speaking out of turn to other higher authorities, such as Jedi, about his opinions. Despite this, Rex followed any order without question, as he saw that a mission was always priority. Fond of using two blaster pistols at the same time, Rex customized his armor with distinctive blue markings. His loyalty to the Republic and the Jedi was absolute, but even this dedicated veteran soldier found himself plagued by doubts as the Clone Wars claimed more lives and brought ruin to more worlds. Rex wondered what the point of the war was, and what price the clones would ultimately pay.

Years after the completion of the Clone Wars, Captain Rex along with Commanders Wolffe and Gregor trudged the plains of Seelos hunting for joopa. It was then that they met the crew of the Ghost, sent by Rex’s old comrade, Ahsoka Tano. After Kanan Jarrus hesitated to give his trust, Rex revealed that the three clones removed their chips before Order 66. The crew solicited the veterans help in finding a potential new base and in turn the clones asked for their assistance catching a joopa. After shooting a menacing probe droid that had been tracking the clones’ walker, Rex proved that his allegiance lied with the Ghost crew. He soon fought alongside Ahsoka once again during the early Rebel Alliance's campaign against the oppressive reign of the Galactic Empire. Rex would help the rebels in their fight against the Empire and efforts to build up the rebellion.

Rex eventually became a commander within the Alliance, soon participating in the Battle of Endor and serving with Han Solo, Leia Organa, and even Like Skywalker and a strike team on the Forrest moon towards victory.

CT-7567, later known as Rex, was a clone of the bounty hunter Jango Fett created and trained on Kamino. He was eventually made a Captain in the Grand Army of the Republic. Rex served in the Grand Army of the Republic to protect the Republic's citizens as part of his loyalty to the Republic. Rex was then assigned to Jedi General Anakin Skywalker as his second in command, whose bravery and unorthodoxy in battle he came to share. He was close friends with Marshal Commander Cody, with their relationship mirroring that of their respective Jedi Generals, Skywalker and Obi-Wan Kenobi. The four of them often received joint assignments to coordinate front-line campaigns against the Separatist Alliance. He was then given command of Torrent Company of the 501st Legion. Rex was eager to follow orders but became less tightly wound in time. Rex participated in many battles over the course of the war, and was fond of his dual DC-17 blaster pistols, which he used extensively in battle.

At the Battle of Christophsis, Rex became a mentor to Skywalker's newly assigned Padawan, Ahsoka Tano, with whom he forged a strong bond. While on a listening post inspection tour with Cody, Rex rallied a small team of rookie soldiers to retake Rishi Station, which they thereafter destroyed to thwart Confederate General Grievous's planned invasion of Kamino. He took part in countless campaigns in the galactic theater of war, from the containment of the Blue Shadow Virus on Naboo and the liberation of Ryloth to other hard-won victories like the Battle of Malastare, the Second Battle of Geonosis, and the Battle of Kamino. Throughout his career, Rex proved to be an effective leader who truly cared for the men under his command, even as he began to doubt his own future and those of his clone brethren in the Republic.

His leadership was put to the ultimate test at the Battle of Umbara, when he was forced to unite the 501st Legion under an interim Jedi General, the obstinate and aggressive Pong Krell. Rex did not see eye-to-eye with Krell and found himself having to balance his troops' well-being with Krell's high-casualty plans. When Krell manipulated the 501st into a fatal confrontation with their comrades from the 212th Attack Battalion, Rex realized their general was a traitor to the Republic, and he risked charges of treason to lead his men in arresting Krell. The ordeal refined his hard-line obedience to orders, as he also learned the value of making his own decisions as a soldier. Rex aided Skywalker, Tano, and Kenobi in rescuing Togruta colonists from the Zygerrian Slave Empire and later offered his soldier's expertise to help the Jedi train local insurgents on Onderon to emancipate their world.

In a stark turn of events, he and Skywalker apprehended Tano on Coruscant after she was framed for a bombing of the Jedi Temple, an incident that culminated in her departure from the Jedi Order. Following the malfunction of a clone during the Battle of Ringo Vinda, Rex and Skywalker gave pursuit of a longtime comrade, ARC trooper Fives, who had gone rogue after unearthing an anti-Jedi directive that had been bred into all of the Republic's clone troopers. Before Fives could prove his findings to Rex and Skywalker, the Coruscant Guard gunned him down for resisting arrest. Following Tano's departure from the Jedi Order, Rex served alongside her during the Siege of Mandalore. At some point during the Clone Wars, Rex removed his inhibitor chip, and as a result, he did not comply with Order 66 when it was issued. 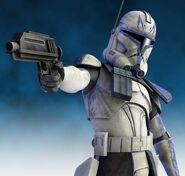