Ezra Bridger was a Human who would become a rebel and a Padawan of the fallen Jedi Order in the early rebel movement Rebel Alliance against the Galactic Empire. Growing up on his own during the age of the Empire, Bridger relied on his street smarts and subconscious Force skills to survive. He became a con artist and small-time thief, doing what he needed to get by on his planet Lothal. But this also hardened Ezra, who by the time he was fourteen years of age, had little to no trust for anyone. A trait that would change when he was introduced to the crew of the Ghost, a band of rebels fighting back against the Galactic Empire. Ezra came to believe in their cause, and saw that he could assist in changing the galaxy for the better. And help from Kanan Jarrus, he began to learn the Jedi ways.

A Force-sensitive human male, Ezra Bridger had tan skin and untamed black hair. He later obtained scars on his left cheek after the battle aboard the Imperial Star Destroyer. Bridger grew up on his own and worked as a small-time thief and con artist, using his street smarts to steal technology and goods from the forces of the Galactic Empire, though he felt no loyalty to others. By 2 BBY, Ezra had adopted a shorter hairstyle with short back and sides.

Initially, Ezra only saw the crew of the Ghost as a means to an end, stealing any valuables from the ship he could find, but he soon befriended and developed a strong bond with the crew members.Ezra's rough upbringing taught him not to trust others, let alone help them. Sometime after meeting the crew of the Ghost, Ezra became a bit more trusting. Ezra was also very charismatic, which helped him get by during his early years. He was thievish, yet easy going and upbeat, and liked to play pranks and make jokes. He flirted with Sabine and pranked Zeb, but with his jokey attitude he hid from the others what he really felt about his parents, as he didn't trust people easily.

During the mission to Malachor, Ezra encountered the former Sith apprentice, Maul, who taught him the basic philosophy of the Sith and encouraged Bridger to use his anger to strengthen him. After the loss of Ahsoka Tano and the blinding of his master, Ezra was determined to never allow his friends to be harmed again. Due to this and influence from the Sith holocron, Bridger started to fight more aggressively, such as killing stormtroopers rather than stunning them. Bridger's use of the Sith holocron strained relations with his master Kanan. In addition, Bridger was a headstrong young man who was willing to circumvent orders. Ezra began to repair his relationship with Kanan after his master rescued him during a dangerous mission at Reklam Station.

Ezra also sought to discover the key to destroying the Sith. Despite being tempted by the dark side and Maul, Ezra ultimately chose to remain loyal to his master Kanan and friend Sabine. His selflessness put him at odds with Maul, who failed to understand Ezra's loyalty to his friends. Ezra also had a great deal of respect for the lives of other sentient beings. This led him to object to Saw Gerrera's harsh treatment of the Geonosian Klik-Klak and his threat to destroy the last Geonosian queen egg. Ezra also had a friendly and kind demeanor which allowed him to gain Klik-Klak's trust.

Ezra was a loyal and sympathetic friend to Sabine Wren. While Sabine was training to wield the Darksaber, he patiently taught her lightsaber strokes. When Sabine wanted to give up, Ezra urged her to persevere and reassured her that Kanan meant well. As he matured, Ezra was able to impart wisdom to his peers. When Sabine told him about her estranged relationship with her family who had supported the Empire, Ezra counselled her that at least she had a family to return to unlike himself. Ezra also had some skill with manipulating his voice to mimic other individuals. On one occasion, he used this to impersonate the Trandoshan Mining Guild captain Seevor in an attempt to allay the suspicions of the Mining Guild authorities.

Ezra was a good actor and was able to pretend to be a bounty hunter during a mission to rescue Kallus. During the course of that mission, he learned to trust the rogue ISB agent and rebel sympathizer with keeping Chopper Base a secret. Due to his youth, Ezra at times could be impulsive. His emotional concern for Kenobi also made him susceptible to the Dark Sider Maul's machinations. Ezra's belief that Kenobi held the key to destroying the Sith led him to embark on an errant mission to find Kenobi. Ezra soon found that Kenobi was more than capable of fending for himself and that his real place was with his adoptive rebel family.

As he grew older, Ezra came to appreciate his master Kanan for teaching him to be a better person. Ezra's devotion to the rebel cause motivated him not to give up when it seemed impossible to solicit reinforcements for the besieged rebel forces at Atollon. His courage and devotion won him the admiration and respect of Mon Mothma and Ursa Wren. Ezra was despondent about the rebel defeat at Atollon but Kanan reassured him that they were still alive to fight another day.

While Ezra admired Saw Gerrera for yielding results, he became disillusioned with the Partisan leader's aggressive tactics and reckless disregard for the lives of non-combatants. Ezra was distraught to learn about his friend Old Jho's death and was visibly angered when Baron Rudor mocked Jho. Like Sabine, Ezra was willing to undertake risky and dangerous actions in service of the Rebel Alliance.

Ezra's sense of comradeship led him to lead a mission to rescue his rebel cell's leader Hera Syndulla. Ezra and his fellow Spectres were devastated by the loss of their co-leader Kanan, who was a mentor and teacher to Ezra. Ezra was lost and frightened during his master's death. After encountering a white loth-wolf named "Dume" who carried Kanan's conscience, Ezra regained his confidence and led a mission to save the Lothal Jedi Temple from the Empire.

Ezra's respect for Ahsoka Tano led him to save her from death by pulling her into the mystical World Between Worlds. Ezra gained Tano's respect for saving her life. In return, Tano promised to find him when she returned to her time. Despite missing his master, Ezra realized under Tano's tutelage that Kanan had died to save the lives of him and his rebel comrades. As a result, Ezra made peace with Kanan's sacrifice. To prevent the Emperor from entering the World Between Worlds, Ezra and his rebel comrades sealed the portal; thus denying the Emperor's ambitions of controlling time and the universe.

Ezra was a cunning and skilled military commander who was able to utilize the Lothal rebels' limited resources to their best advantage. Recognizing that the rebels lacked an army that could take Capital City, he instead devised a plot that involved luring Governor Pryce to the Lothal rebel camp so that they could take her prisoner. As a commander, Ezra was not one to take the glory for himself but instead thanked his comrades for helping them to achieve victory. Ezra's primary goal as rebel leader was to show the galaxy that the Empire could be defeated and driven from Lothal.

Working with Hera, Rex, Kallus, and Ryder Azadi, Ezra helped lead a successful operation to capture the Dome's command center and initiate Protocol 13. In line with the Jedi philosophy of not letting innocents suffer, Ezra willingly surrendered himself to Thrawn to save the people of Capital City. Unlike Thrawn, Ezra believed that the Force was not a weapon and disagreed with Thrawn's idea that the Jedi did not know how to wield power.

While Ezra was tempted by the Emperor's offer of reuniting with his family, Ezra realized that the Emperor was trying to manipulate him. Ezra was also willing to sacrifice himself to see that the purrgil took Thrawn and his fleet away from Lothal. Regarding the Spectres as his family, Ezra entrusted them with protecting his homeworld in his absence 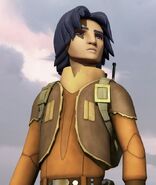