Era of the Resistance

Kylo Ren, born Ben Solo was a dark, powerful, as well as an extremely obsessive Master of the Knights of Ren, and leader of the Empire Remnant known as the First Order, formerly the right-hand and a dark side apprentice of late Supreme Leader Snoke. As an son of Han Solo and Leia Organa, Solo was the nephew of Jedi Luke Skywalker, and a grandson of the Jedi Knight Anakin Skywalker later known as the Dark Lord of the Sith Darth Vader. A warrior strong with the Dark Side of the Force as well as an champion of the First Order, Kylo Ren leads the First Order as a Supreme Leader, with a temper as fiery as an unconventional lightsaber. After taking control from Snoke by assassinating his master, Kylo continued their plans of destroying the New Republic, Resistance and the legacy of the Jedi. Though a warrior of the dark side, Solo still struggles against the pull of the light, growing darker and more extreme.

Ben Solo, was born in Hanna City, the capital of Chandrila on the day when the Galactic Concordance had been signed by the New Republic and the Galactic Empire; ending the conflict known as the Galactic Civil War. This was roughly a year after the Battle of Endor, in which his parents, Leia Organa and Han Solo, had led the Alliance to Restore the Republic in the great victory over the Empire. The great victory at Endor ended with the demise of Darth Sidious, and Organa's biological father, the Sith-Lord Darth Vader. While Ben was still in his mother's womb, she could feel her son through the Force. After he was born, there were contradictory rumors that Ben's birth took a total of three days. Another tale claimed that it was a fast and painless birth. There were also rumors that said Ben Solo was born with a shock of black hair and had a full set of teeth.

Though Han lacked the same Force bond that Leia had with her son, he comforted himself with the fact that he had a fatherly bond with Ben. Ben Solo's namesake was that of the late Jedi Master Obi-Wan Kenobi, who went by the name of Ben Kenobi while in exile on Tatooine after the fall of the Jedi Order. In his youth, Ben's parents had active lives in their respective professions. Han Solo, a smuggler before joining the rebellion, was unable to stay in one place for long. Organa, meanwhile, became a respected senator in the New Republic, the government that arose after the Battle of Endor and that had served the Empire a final defeat during the Battle of Jakku around the time of Ben's birth. Organa and Solo's natures clashed, and their busy lives left Ben with feelings of abandonment. He proved to be connected to the Force, taking after his mother, as well as his grandfather. Leia chose to keep the truth of Ben's lineage from him at least until he was old enough, but Leia still had not told him by the age of twenty-three. She nonetheless hoped that she could tell her son the truth, and that Skywalker could explain that, Anakin Skywalker returned and redeemed himself. He eventually trained with Luke when he was ten years old.

Reasons why Ben gave into evil was not simply because of Snoke's corruption, but also due to his mother and father having a tumultuous relationship, given Han Solo's career as a smuggler and Leia's role as a political figure. Six years prior to events of the Assault on Starkiller Base, Leia's political enemies exposed her parentage to the public, which is how Ben discovered he was the grandson of Darth Vader. After succumbing to the darkness, Kylo Ren went on to lead the Knights of Ren in a large scale attack on Luke's New Jedi Order, exterminating the recruits and in some cases recruit them to the Dark Side. He would don a uniform modeled after the Sith, with a black cloak and a mask inspired by various Sith Lords such as Darth Revan and his own grandfather Darth Vader.

After Ren's fall, his uncle Luke Skywalker vanished into exile to search for the first Jedi temple. Years after the fall of the New Jedi Order, the First Order had recovered a part of the map to the temple in the archives of the Galactic Empire. They learned that Lor San Tekka, a member of the Church of the Force on the planet Jakku, had the rest of the map fragment, so Ren commanded the First Order forces in search of the map. The map fell into the hands of the Resistance, as Organa, the leader of the small military opposition to the First Order, hoped to find her brother and bring him back into the fight against the Dark Side.

Ren hunted the map across the galaxy and eventually learned that it and the droid who carried it, BB-8, had come into Solo's possession. He tracked them to Takodana, where Ren discovered Rey, a Force-sensitive who had seen the map and was helping BB-8. Ren brought Rey to Starkiller Base, a First Order-controlled planet with a built-in superweapon, and attempted to probe her mind for the map's information, but she resisted and eventually managed to escape. Shortly after, the Resistance attacked Starkiller Base in the hopes of destroying it, and Ren encountered Solo once again.

After a brief confrontation, he killed his father, hoping to eliminate the light that Ren struggled with inside himself. Ren then pursued Rey and the fugitive stormtrooper Finn into a forest as the battle raged on above. He engaged both in a lightsaber duel, besting Finn before being beaten and injured by Rey. As Starkiller Base began to implode from the attack, the Supreme Leader ordered General Hux to bring Ren before him so his training could be completed.

Ben With His Father Han Solo and His Mother Leia Organa 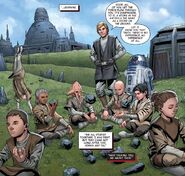 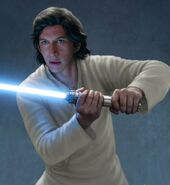 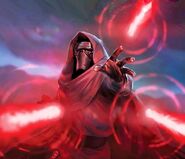 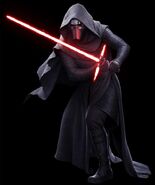